Yes. Another damn food review ... it seems like it's all I bother doing at this point. Wanting another chicken McWrap, I decided to get a grilled chicken and bacon one to see how it would be. Naturally, McDonald's fucked up and gave me the crispy chicken. This is my review. 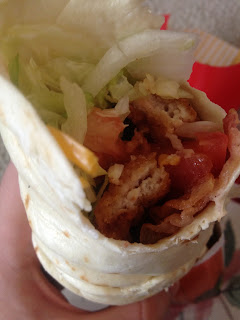 As it turns out, this picture's pretty deceiving. There was a ridiculous amount of lettuce in this particular McWrap, and the bottom wasn't folded correctly, resulting in a huge pile of lettuce, three pieces of chicken, and a tomato down there. The first one I had wasn't made this poorly, so I have to figure a mentally handicapped kid made this one. The chicken tasted a lot like the chicken that's in McDonald's Southwestern chicken sandwich, which is a plus. As I already mentioned, there was a shit ton of lettuce, and there were a good number of bites that were lettuce and bread, with no ranch (I didn't say that there was basically no ranch in this? Oops.). The bacon was pretty bad, but manageable ... just a quick look at it lets you know it was microwaved. The tiny bits of cheese that were in there were pointless, and didn't add anything. The tomato and shitload of lettuce seemed to be fresh, for what it's worth.

Overall, not as good as the sweet chili McWrap -- not so much because this one was made pretty badly, but because it doesn't taste quite as good. The premium McWraps are good, lunch-sized options, and are a meal within themself. Not the best thing I've had from McDonald's, but worthy of a buy... so long as the person making yours knows how to fold the goddamn bread.

I don't usually do two food reviews in one, but what the hell... no one reads these damn things anyway! I CAN DO WHAT I WANT!!! Alright, so today for dinner, I kind of had a hankerin' for Burger King (unusual, I know) and remembered that they had some new things on the menu. Oh, Burger King... constantly adding shit to the menu while not caring about the quality of the product... ON WE GO!

First of all, this is the way Burger King describes their chipotle chicken sandwich:


The chipotle chicken sandwich wasn't at all what I thought it would be. Not just because the picture (as usual) was WAY off, but because it didn't taste chipotle-esque at all. In fact, I didn't notice any even on my sandwich. I opted for the grilled chicken just for the hell of it... the nutrition facts on it blew my mind. Most notably, over 3,000mg of sodium. Uh... what in the HELL!? Okay, okay... the taste. Burger King's chicken has always been some of my favorite at fast food restaurants (especially their Tendercrisp variety), so I knew what to expect. The bread was soft and had a slight sweetness to it. The chicken was hot and juicy (albeit salty... imagine that), the bacon was crispy and better than I thought it would be, and the melty cheese actually had flavor. The caramelized onions were bland though, the lettuce and tomato weren't exactly fresh (as usual), and, like I said, I didn't get any chipotle flavor. It tasted alright besides that, but it's still not something I'd get again. The sandwich was WAY smaller than I had anticipated, and the slippery chicken breast bastard kept sliding away every time I took a bite... definitely messy.


And for the loaded tater tots:

A bite-sized snack that is sure to kick your meal up a notch! Enjoy warm fluffy potatoes filled with flavorful bacon and sweet onions on the inside, with a savory and crispy crumb coating on the outside. Available in eight, 10 or 12 piece servings. These LOADED TATER TOTS™ potatoes are great for sharing and are a savory complement to any meal.


And that's that. The important thing is the taste, as always. I opened up my little box of tots and they were fresh out of the fryer -- imagine that. Glistening with grease, and hot through the cardboard. I took a bite, and I liked it, unsurprisingly. It's nothing but a loaded baked potato in form of a tater tot, so it's hard to go wrong with that. They're not mind blowing, but still worth a purchase and another and another. There's not much else to say about them, other than that they should probably have a permanent spot on Burger King's menu.

For the love of God, Arby's, make this a permanent menu item. That's pretty much it. The Hawaiian roll is sweet, soft, and just a lot better than the run-of-the-mill sesame seed bun. Also, it's a bit bigger, so the sandwich is more filling. This sandwich wins due to its wide amount of flavors and textures. The sweet, soft bread, salty roast beef, crunchy and sour pickles, and slightly spicy dijon mustard. Add a packet of Arby's sauce, and it's perfect. The one thing that I pretty much forgot about is the Swiss cheese. The only reason I knew it was there was because I saw it. A single slice of cheese against all of the other flavors was pointless, and only added calories. A second slice of cheese may have helped it.

This is one of the best things that I've ever had from Arby's. The sandwich itself is about $4, which I guess is a fairly reasonable price, given its size and the average cost of fast food now. If you like Arby's regular roast beef sandwich, then this is something you absolutely need to try... but only if you like pickles. And mustard. If you don't like either of those, then, in the words of Gordon Ramsay, "Piss off, yeah?"