Hey, Taco Bell's released something new again, and this apparently isn't for a limited time -- the Dollar Cravings Menu at Taco Bell is their new dollar menu and it features a handful of fairly diverse items all for, you guessed it, a dollar. (I have not and will not review the dessert options on the menu since I'm not interested in them.)

First of all, the 440 calorie Beefy Fritos Burrito. I was looking forward to a re-release of the Beefy Crunch Burrito for this menu, but Taco Bell has instead given us this. 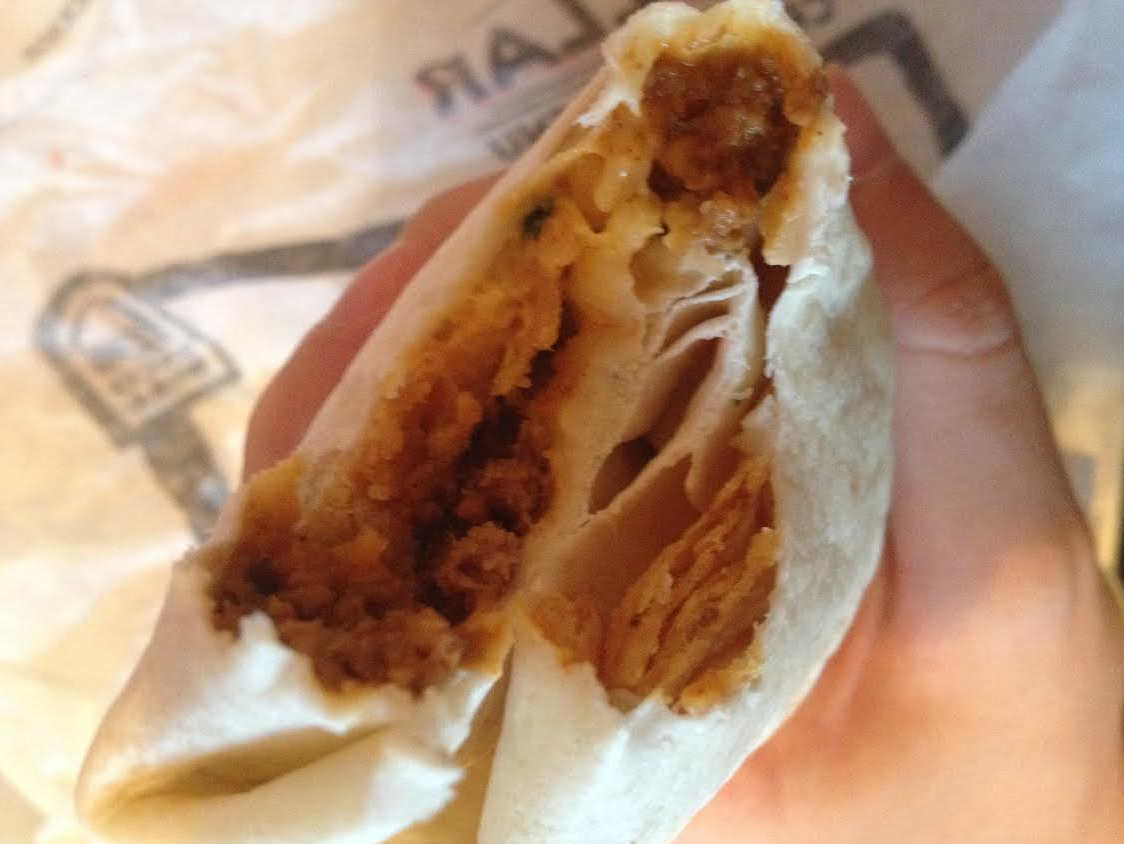 Next up is the Shredded Chicken Mini Quesadilla. I think mostly everybody has tried an overpriced, more-tortilla-than-filling quesadilla at Taco Bell, but this 180 calorie snack version comes in with a weight with less than that of a crunchy taco, and offers up shredded chicken. 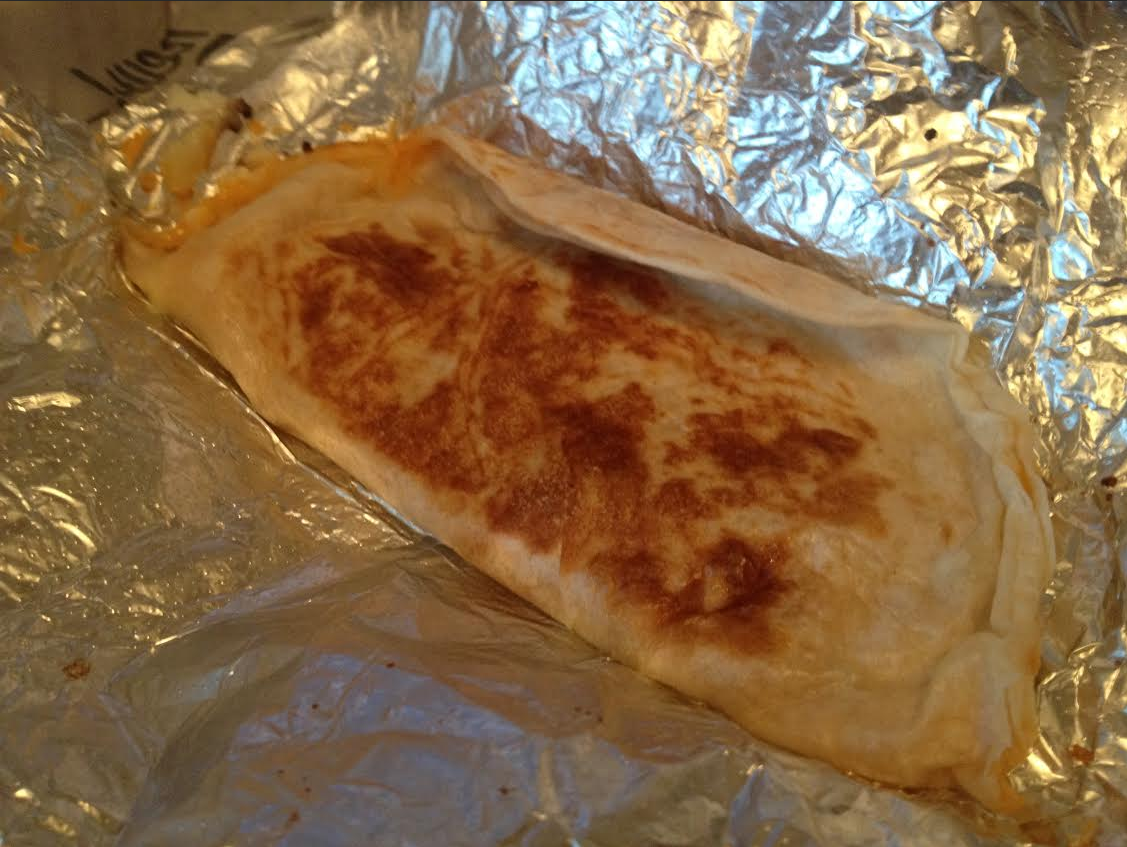 Not a very good picture just because you see nothing inside of it and you get no idea of its size, but it's maybe six inches long -- anyway, there's not much going on with this. You get Taco Bell's shredded chicken, cheese, and chipotle sauce. Simplicity can be a good thing, but it's not here. If you haven't ever had the shredded chicken at Taco Bell (I had in the past), know that it is very salty. That alone makes this a Dollar Cravings item I'd not get often at all... I expect the beef version to be quite a lot better for that reason alone. While I don't care all too much for this quesadilla, it is a much better value than Taco Bell's regular quesadilla in the sense that with this you get all the filling without those useless end pieces that have basically nothing in them. 3/5

The last thing I ordered off the Dollar Cravings menu on my first visit was the "new" Cheesy Bean and Rice Burrito... ay, there's a mouthful. Why not call this thing the CBRito? I say "new" by the way because this 420 calorie burrito has been on the menu before. 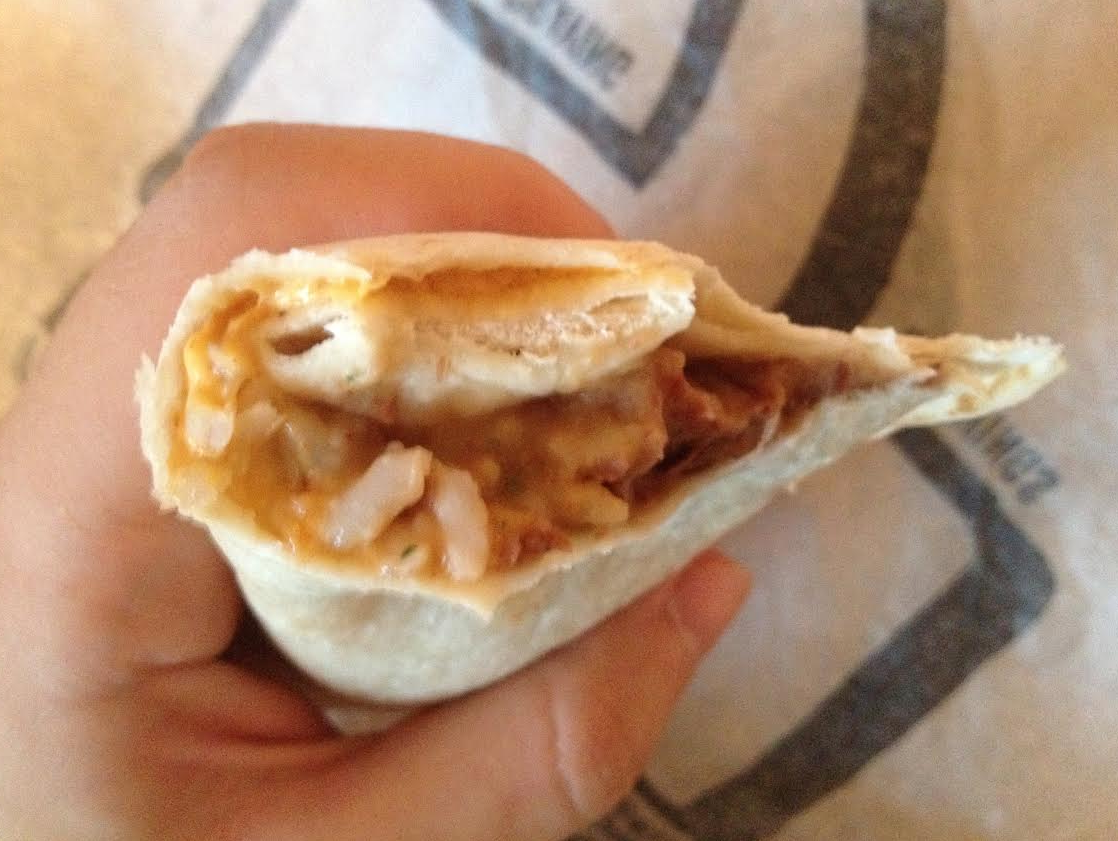 Along with the Beefy Crunch Burrito, one of the best values on the Dollar Cravings Menu, and a really good option for the vegetarians who eat at Taco Bell. It's a pretty simple burrito, but it's tasty and pretty filling thanks to the serving of beans. Since I had the now-defunct (thanks a lot, Taco Bell jack offs) Volcano Burrito and Beefy Crunch Burrito though, it always feels like something's missing when I bite into a burrito at Taco Bell and don't get a crunch. Still, the flavor's there. Cheese, check. Beans, check. Rice, check. The jalapeno sauce adds a bit of "oomph", though it's not super noticeable with the nacho cheese already in there, on top of the fact that I didn't get much of the sauce in my burrito in the first place. I enjoyed it, and I'd have it again. 3.75/5

The Beefy Mini Quesadilla, which comes in at 210 calories turned out to be quite a lot better than the shredded chicken variety. While it has the same ingredients, it's quite a bit less salty, and there's more and better flavor. The value of it isn't nearly as good as one of the burritos on the Dollar Cravings Menu, but the chipotle sauce is tasty and works better with Taco Bell's beef than the already hugely salty shredded chicken. It's not very filling, but it's got some pretty nice flavor, all for just a buck. 3.75/5

The 240 calorie  Spicy Potato Soft Taco was a massive disappointment for me. I've tried it twice now, and I just can't appreciate it because my Taco Bell simply doesn't know how to make their potatoes. Both times I've ordered it, the potatoes were stale and super hard. The chipotle sauce is as tasty as ever, but it just can't save those cold, should-have-been-in-the-trash-days-ago potatoes. The worst thing I think I've ever had at Taco Bell. 1.5/5

Last up, the Spicy Tostada... this is one of the last things I ordered and as it turns out, it's one of my favorites on the menu... actually, it probably is my favorite. At 210 calories, you're actually getting a pretty hefty tostada. Honestly, I think my Taco Bell loads them up more than they should, because I find it hard to believe it's only 210. Few items on the Cravings Menu have tomatoes and lettuce, so it's sort of... "refreshing" to have them on this tostada, which is slathered in beans and chipotle sauce. A great value at a buck. 4.25/5


And that's the menu (for the most part). I haven't had the Triple Layer Nachos, or Cheese Roll Up yet, but I'll add to this once I do. Well... I have had the Triple Layer Nachos (See review here) and the Cheese Roll Up, but I haven't reviewed the latter yet... and a re-review of the nachos wouldn't hurt. I guess I should say I haven't had them off this menu yet. More to come.
Posted by Alex at 9:53 AM